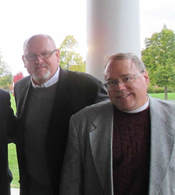 The Progressive Village Performance Network (PVPN) said farewell to two of its longest term, most influential board members, Bob Plowman and Bob Mackert.

Bob Plowman is the founder of the group: PVPN was built using his vision. His vision was to create a theatre group open to everyone. Whether a person was young or old, experienced or novice, wanting to be on-stage or behind the scenes, PVPN would welcome them with open arms. This created a place where people felt comfortable and thus are always wanting to come back to the group. Bob’s leadership has allowed the group to grow well beyond the boundaries of Westmont. He wanted to build an atmosphere of acceptance; it gave this community a chance to express itself through the arts.

Bob Mackert played a major role in building this organization. He was willing to do whatever it took to make sure the group could put on quality performances for the community. Bob has worn many hats for this organization: serving as a director, producer, actor, vice president and president. Bob and his wife Karen played a crucial role in helping the group achieve its success.

Both gentlemen will be missed. Their contributions to PVPN and the community will never be forgotten. Their ideals will be a part of every future performance. Their legacy is cemented in PVPN. PVPN sends out its most sincere gratitude and wishes them the best of luck.

Back to News Page